The history of our house is inextricably linked with the origin of Ligovsky Prospekt. The road, which is now called Ligovsky Prospekt, existed before Peter I decided to found a city here. There were villages in the delta of the Neva river and this road - the Novgorod highway connected them with Moscow and Veliky Novgorod. When the construction of the city began, there were other roads, the need for this diminished. Therefore it was decided to dig in its place a canal from which it would be convenient to take water for the fountains of the Summer Garden.

The beginning of the canal was taken in the river Liga in the village Gorelovo. It was dug for seven years and finished in 1725. The canal in the area of ​​Nekrasov Street was closed with pools, from which water was taken for fountains. Previously it was called Basseinaya. But then it turned out that the pressure for the fountains was not enough and the water for them was taken from the Fontanka river (at that time - Nameless Yerik). The water of the Ligovsky Canal was used as a drinking water. But again failure - in 1777 there was a flood and the water became turbid, in addition and the fountains collapsed ... The canal completely lost its significance. At the end of the 19th century the Ligovsky Canal was filled up and it became a street: first – Ligovskaya, after the war for some time - the Stalingrad Prospekt and since 1956 - Ligovsky Prospekt.

In the second half of the 19th century along the Ligovsky Prospekt, trams of the horse-railway ("Konka") started to move around the city until an electric tram was invented. "Konka" is a tram, the tram-car of which moved with the help of horsepower. And the tram-cars were even two-storeyed. Kerosene lamps were lit up in the tram-cars in the evenings!

The Great Concert Hall "Oktyabrsky" is located on the even side - in the house No. 6. It was built on the 50th anniversary of the revolution, in 1967. They opened exactly in time to the date - in October. For this purpose the Greek church was destroyed, it prevented the construction of the Hall.

In the 18th century between the Fontanka and Ligovka rivers court clerks settled according to their occupation. The names of lanes - Kuznechny and Svechnoy ... prove it.  The building of the “Oktyabrskaya Hotel” occupies the entire block behind the hospital. It was built in 1851 simultaneously with the Moskovsky railway station. They called it in the name of the church that was nearby - Znamenskaya. The hotel was equipped with the latest technology and was popular among those who came to the capital on business, of course, who had much money. For some time it was called North, Big North, but from 1918 until now it is called Oktyabrskaya. Even once Lenin and Krupskaya stayed there, naturally, to solve party affairs.

In the revolutionary and war years the hotel was used for housing workers of the railway, and in the 1920s they created the so-called “The urban dormitory of the proletariat” and brought there homeless children from all over the city, mostly from the stations. 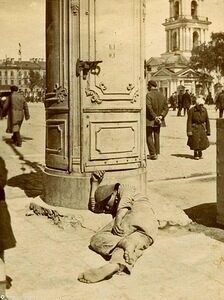 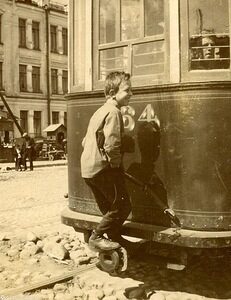 The second facade of hotel comes to Vosstaniya Square. Vosstaniya Square is the second for a significance in the city (after Palace), and by revolutionary holidays it was decorated in every possible way: in the 1936-1937 M.N. Tukhachevsky, K.V. Voroshilov and S.M. Budenny's portraits. One of them, M.N. Tukhachevsky will be repressed and shot in 1937. It is necessary to tell that somewhere from twenties years of the 20th century the area of Vosstaniya Square and Ligovka river gradually became the most marginal district of the city. Otherwise it could not be. Peter I moved to this area the mass of peasants for so-called "departure of post chase". (Voronezh, Tambov, Kursk still kept names). There was no house without a horse-cab driver’s yard. There were about 13 thousand horses here. These peasants lived in terrible conditions and worked for 12-16 hours a day. What could they do, how not to drink? Until now we know the verbal expression "drunk as a horse-cab driver", and it was justified. They had a rest in taverns which were open day and night. Scandals and fights happened often. Whistles were heard, the policeman appeared. They were prisoned or allowed to go home. 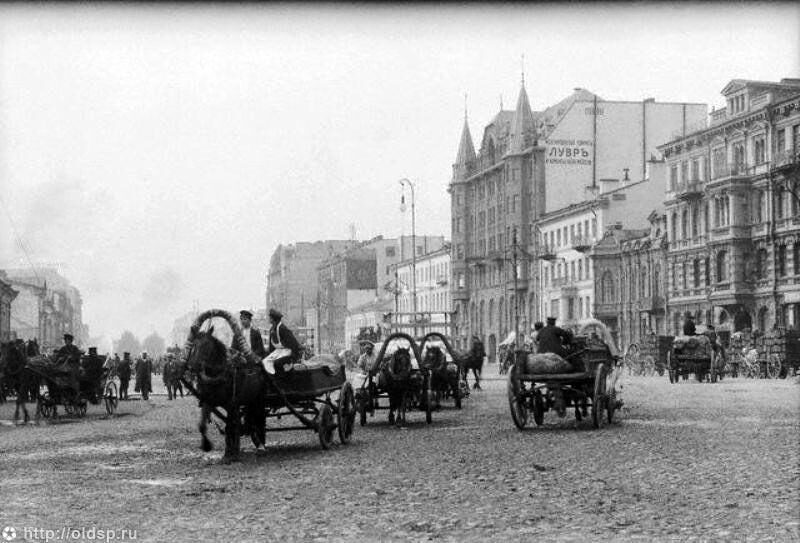 The odd side of Ligovsky Prospekt was built up by former commercial apartment buildings.

So we came to the history of our house No. 63, built at the beginning of the 20th century in modernist style.

The beginning of the century - the time when the style of "Northern Modern" appeared in St. Petersburg.

In the late 19th - early 20th century a land plot of 479 square meters belonged to the merchant of the 1st Guild, co-owner of the Paper and Tile factories, a member of the Board of the Private Commercial Bank and the Nevsky Refinery, a member of the St. Petersburg Stock Exchange Committee and the charity society of the followers of homeopathy, the hereditary honorable citizen, Alexander Trofimovich Shitov.  After 1904 this land plot was a part of the capital of the Trading House "Alexey Shitov", founded by the brother of the house owner.

The retired guard captain, the St. Petersburg financier and the house owner the Vladimir Vasil'evich Markozov purchased the land plot in 1909 for construction of a commercial apartment building, which was built here in 1909-1912 by the architect E.I. Gontskevich. Vladimir Markozov owned the house with his brother, the retired guard colonel Dmitri, who lived in Moscow. The six-storied house of Markozov was sharply allocated against the background of two-three-story peripheral buildings of Ligovskaya Street with the powerful gray facade with two symmetrically located three-window bay windows covering the second - the sixth floors. Unusual for this area seemed to be superstructures above the bay windows with an attic between them, actually hiding the seventh floor, and a helmet-shaped low tower. The appearance of this house influenced the architecture of the neighboring house built in 1912-1913, on the facade of which the architect V.I. Wang-der-Gyukht built the same bay windows, and the architecture of the house No. 130 with its helmet-shaped tower built in 1913 by the architect AI Fantalov.

In 1917 in this house there lived Rudolf Valfridovich de-Valden (Rudolf Valden) -  a managing director of the St. Petersburg JSC of printing business in Russia "Slovo", the representative of paper JSC “Dubrovka”, the resident of the Grand Duchy of Finland,  the retired lieutenant. Sergei Nikolaevich Gerbel - a member of the State Council, the highest commission established to strengthen the military fleet for voluntary donations (since 1909), the committee for the care of labor assistance, the secret counselor of the Romanov committee headmaster with his wife Alexandra Isidorovna also lived here (they lived in Kuznechny lane, 14 before). 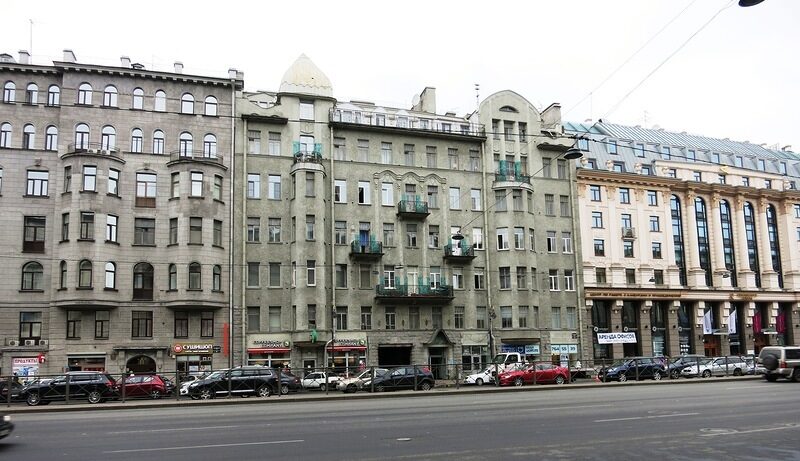